Even otherwise highly numerate people have been known to throw up their hands in horror at the thought of adding together times.
A system like time, which is not decimal, can be counter-intuitive and requires concentration.
However, with a bit of application, you too can learn how to calculate with time, and gain confidence in manipulating hours, minutes and seconds.

The basic units of time, which allow you to do calculations involving time, are: 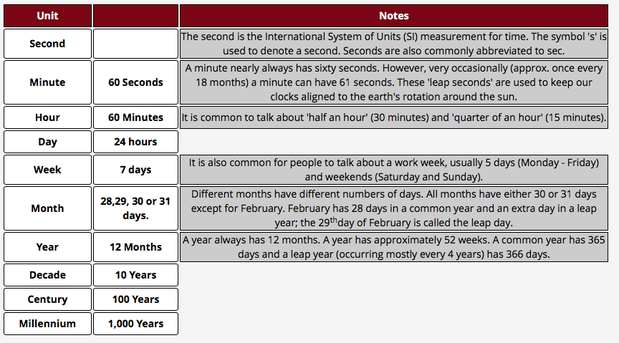 Years are commonly split into quarters, especially in business and education settings with each quarter being three months or approximately 90 days. Quarters in a specific business or sector may not necessarily be the same as those indicated below:
The number of days in a month varies. All months have the same number of days each year except for February which has 28 days in a common year and 29 in a leap year.

There are many different ways to write time. The simplest (digital) form is as written hh.mm or hh:mm, for example 10.21 or 10:21.
Hours may be either divided into 24 or two lots of 12, in which case all those before noon are designated am (ante meridiem) and those after noon are pm (post meridiem). For example 4:10pm is the same time as 16:10.
​

You can also describe time in words, such as 'ten minutes past/after twelve', or 'ten past twelve'. Up to half way through an hour, we describe ‘minutes past’ the hour; beyond ‘half past’ we talk about minutes to/before the next hour. 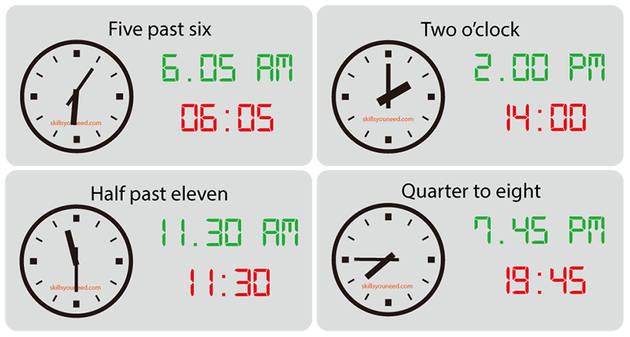 Calculating the Passage of Time

In the normal way of things, to calculate how much one thing is greater than another you would simply subtract one from another. However, subtracting time is complicated because it’s not decimal. Instead of the columns being hundreds, tens and units, they are hours, minutes and seconds.

The other way of calculating how much time has passed between Time A and Time B is:

​ABOUT TIME TO DECIMAL CONVERTER

Enter the time values in HH:MM:SS

How to Calculate Decimal from Time